MUST READ For Everyone Weary of Jared Kushner! - AmericaFirstPatriots.com

by Noah 6 years ago6 months ago
9views
0

I’ll admit it, I am no fan of Jared Kushner.

And I’m even growing weary of Jared’s influence on Ivanka.  Jared and Ivanka seem to align much more with the Globalists than they do with America-First.  As such, they are constantly at odds with Donald Trump and guys like Steve Bannon.  It’s too bad.

Take, for example, the recent Paris Climate Change Agreement issue.  Ivanka lobbied her father hard to stay in the Agreement, even going so far as to bring Al Gore into the White House to meet with President Trump!  Are you kidding me?  Has she learned NOTHING from her father?

So you can understand why your humble author, along with many, many other great Americans are very weary of these two.  We are worried about the influence they are wielding in the White House and how much sway they may have over President Trump.

Well, any concerns we may have previously had about that appear to be silenced by Donald Trump’s defiant and incredibly bold and courageous move to withdraw the United States from the Paris Agreement.  With all forces of the Marxist, Globalist regime fighting against him, including his daughter and son-in-law, President Trump stood firm and made the right decision.  What an amazing man we have in the White House!

A picture is worth a thousand words: 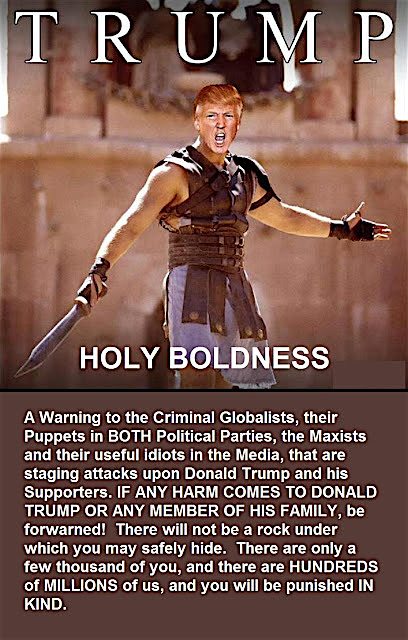 On this topic, I recently came across a brilliant post from Butch Robinson over at LettersFromTheGulag.  Here is a portion, and you can read the entire post on his site here.  Excellent analysis, and incredibly well said.  Please SHARE to pass along the great message!

I wrote privately to a friend who has been absolutely paranoid and wringing his hands about the influence of Ivanka Trump and Jared Kushner on the President. Every few days, for a couple of months, I was getting “panic” articles and comments about what Ivanka was doing, “organizing business and industrial leaders to influence her father to stay in the Globalist Paris Climate Agreement.” He was even part of a movement to try to get her and her husband fired. They were serious, they wanted them OUT of the White House! Regardless of what the stories said, on a gut level, I simply could not take them seriously.

I wrote him this private opinion:

“The anchor in Trump’s life for the last twenty years has been Ivanka and the boys. As a businessman and developer I doubt seriously that Ivanka or her husband influenced Trump to make a single bad decision, he was not predisposed to make. HE will decide on the Paris Agreement, that decision is in his character. I can’t tell you what that decision will be, but try as I will, I can’t imagine him keeping us in it. That would be diametrically opposed to his core understanding and principles.

“Ivanka, regardless who she really is, what her character and philosophy really are, is as much a part of his “elder life” as his own skin. Asking him to rip off his skin to soothe your political fear, is cruel, to put it mildly. (Insane from fear would have been a better choice of words)  For Trump, it would be foolish to link closeness and undue influence.

“I personally believe that he is using Ivanka as a “liberal bone” to toss to the Cultural Marxist establishment, to keep everyone off kilter and to let them understand that indeed he listens to their opinions, sort of a back channel to the Globalist enemy. ”
I can add that I think too that he uses her to “draw people out” who don’t agree with him on some issues. Her activity helped Trump gauge the nature and strength of the opposition. (Which was HUGE.)

At another time I explained to my anxious friend, when he was suggesting “Trump needs to get rid of X, and shut Y up, etc” how from Trump’s on testimony and the witness of countless others who have dealt with Trump, he LIKES to hear all sides of any important issue; he wants to hear the very best arguments, especially if they are diametrically opposed. You see, in REAL LIFE, FACTS, DATA Matter. It is the reason that he does not surround himself, like every other president in my lifetime, with “loyalist yes men” but rather independent thinkers, even some like his daughter who are foolishly fans of Globalism and believes the FAKE science of Global Warming. I would bet that the Manhattan Limousine Liberal Ivanka Trump also believes in the FAKE science of Multi-Genderism. Yes, her father was a huge influence on her life, but so was the “culture” in which she was raised. To be raised in Manhattan in the private schools of the rich, or the public schools for that matter and NOT believe in the common consciousness of the Cultural, which is Cultural Marxist, would have made her a social pariah, a weirdo no one would have wished to number as a friend. But instead, she was popular and even friends with the then president’s daughter Chelsea Clinton.

Trump loves Ivanka and is very proud of her because she is physically stunning, and he’s visual, and she is “sharp” which he often says, meaning she has quick mental acuity and learns quickly. But he does not share her formative “consciousness” which for Trump, despite his father’s old school wealth, was Brooklyn working class, not Manhattan Cultural Marxist.

Seeing the strength of the man whose words, movements, intentions and resultant actions I have closely observed for two years now, even exchanging some ideas, I think the idea that ANYONE COULD BE undue influence on Donald Trump, misses the CORE of who he is. Prior to June 1st, 2017, I would not have written that publicly, since it was opinion without sufficient DATA to back it up, though I did expressed this idea many times privately. However, yesterday proved the validity of my opinion, no longer a mere opinion but proved, fact. “No one is capable of unduly influencing Donald Trump” that is simply now a proved fact.